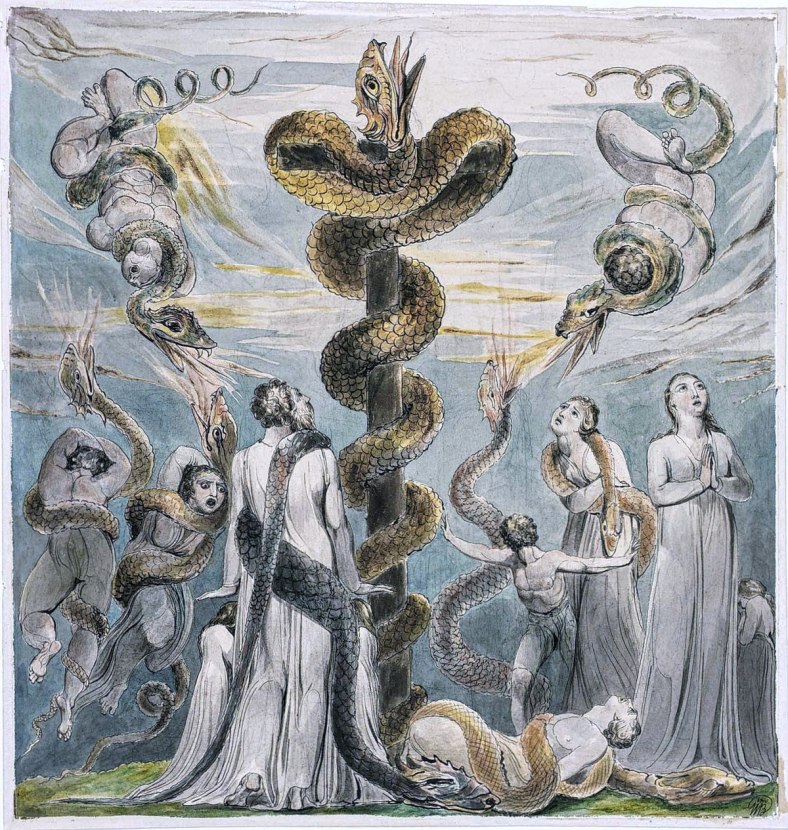 Such an interesting story in the Book of Numbers.  The people of Israel are on the road between Mt. Hor and the Gulf of Aqaba.  They’re complaining.  Again.  They’re not happy with the food.  It’s always something.  Anyway, the people grumbled, so the Lord sent poisonous snakes among them, and many Israelites were bitten and died.  That’s how the Israelites tell the story.

Nobody ever tells the story from the snakes’ point of view.  The way they see it, they were all just hanging about, minding their own snaky business in Snake Land when suddenly the whole nation of Israel showed up with all their noisy grumbling and complaints and pitched camp right on top of them, driving tent pegs down into their dens, breaking their eggs, chasing them with sticks, throwing rocks at them, hacking at them with swords… So yeah, they bit a few of them.  They were just trying to defend themselves.  They weren’t trying to kill anybody.  Why would they?  The Israelites were too big to eat…at least for those kinds of snakes.

Well, that’s not the way we get the story in the Book of Numbers, but then snakes never were any good at public relations, and they don’t come off too well in the Bible as a rule.  Still, it’s interesting that in this particular instance, even in the Moses version of the story, God is using the snakes to accomplish God’s business and that includes healing cranky, ungrateful people from snakebite… which they wouldn’t have got bit in the first place if they hadn’t been cranky and ungrateful and gone poking about looking for something else to eat when there wasn’t anything kosher out there anyway.

So, the moral of that story is be grateful for what you have, even if you’re a little tired of it.  And leave the snakes alone.

Many, many, many, many, many years later, this story would come up again when Jesus sat down one night with a Pharisee named Nicodemus.  Jesus was trying to help Nicodemus understand some very basic things about living in the love of God.  This was difficult for Nicodemus because he was a very smart and knowledgeable person, a teacher, in fact.  He knew the sacred writings of Israel backwards and forwards and upside down, but the things Jesus was saying mystified him.  He had a lot to unlearn.  The way he understood things got in the way of him comprehending things…if you grasp what I’m saying.

Nicodemus needed another pathway into the mystery.

It’s like this, said Jesus.  Remember when Moses lifted up that bronze snake in the wilderness?  It’s like that.  The Human One will also be lifted up.  And in the same way that people were healed when they looked to that bronze snake gleaming in the sun,  they’ll be healed when they look to the Human One, only they’ll be healed of something much more deadly than snake venom.

Have you ever wondered what kind of magic was at work in that bronze snake on that pole in the desert.  It was a powerful magic, stronger than any other.  When people looked at that snake on the pole, the light flashing off of it pierced their hearts and reminded them that they had complained against Moses and against God.  They had been in a desert, in a land of no food and no water, and God had provided for them.  But they were ungrateful.  There was poison in their hearts and it came out in their words.  The snakes biting them was a kind of metaphor for the way they had been treating each other.  And Moses.  And God.

When they looked at that bronze snake glinting in the desert sun, they could see a very unflattering image of themselves.  They could taste the bitterness of their ingratitude and the venom of their complaining.  So they repented.  And they were healed.  Because they also saw that God loved them enough to transform them.  They could stop being snakes, metaphorical or otherwise.  The magic, the power that emanated from that snake on the pole was God’s forgiveness and God’s love.

Listen, Nicodemus.  God loves the world so much that God has given God’s only Son so that whoever believes him won’t perish, won’t fade into an everlasting death and nothingness, but will instead live forever in the light of God’s love.

You think God is about judgment?   I’ll tell you about judgment.  God wants to bring everyone and everything, even the snakes, into the light of God’s love.  But some don’t want to come.  Some want to stay in the dark.  Some want to keep living in the deep shadows of hatred and fear, and us versus them.  Some have a greedy hunger in them that wouldn’t be satisfied if they swallowed the whole earth.  Some think they are the whole earth and don’t have room in their hearts for anyone or anything else.  They think they’re all that and a bag of chips.  Some, many really, want to keep judging others, because it’s the only way they can make themselves feel like they have any value, so they just keep living in the shadow of judgment…and the shadow of their own fears.

But the Son of God is not here to judge.  The Son came to heal.  To save.  To lead people out of the shadows.

The world has forgotten how lovely it is.  The Son of God has come to help the world remember, to relearn its beauty and its kindness.

The world has forgotten that when God created everything God said it was good.  All of it.  Everyone.  Even the snakes.

The Son of God has come to help people remember Original Goodness.[1]

All of that is what Jesus was trying to get Nicodemus to  understand.  And us.  It’s what he would like us to understand, too.

When you think about it, all of this is about disruption.

The Israelites disrupt the generally sleepy life of the snakes when they pitch camp in their territory. The snakes disrupt the grumbly and quarrelsome life of the Israelites when they start biting them.  God and Moses disrupt the poisonous dynamics of fear and dissatisfaction when they set up the snake on a pole.  Nicodemus disrupts Jesus’ quiet evening when he drops by at night for a private interview.  In his conversation with Nicodemus, Jesus disrupts our understanding of theology and the scriptures, especially our understanding of how judgment works.

God works through disruptions to transform things and people.

This week we observed the anniversary of two significant disruptions.

Wednesday, March 10, was the 88th anniversary of the Long Beach earthquake of 1933.  Between 115 to 120 people were killed.  Damage was estimated at $40 million.  That would be more than $800 million today.  Two hundred thirty school buildings were either destroyed or declared unsafe for use.  Out of that disruption, though, came new standards for building safety, including specific codes for school buildings.  New methods of government assistance for disaster response and reconstruction were instituted, too, as people realized that these kinds of resources were needed when damage was too widespread or extensive to expect a city to be able to recover and rebuild on its own.  Essentially, we found new ways to take care of each other.  To love each other.

The other anniversary is one we’re all too aware of.  It’s been one year since we were all in church together, worshipping in our sanctuary.  Our building.  But we’ve never stopped being church.  The disruption of this pandemic has made being church more difficult in some ways, but it has also transformed us in some important ways, too.  Like all disruptions, it has taught us more about who we are and invited us to think about who we want to be, who we are called to be, as we move forward.

The Israelites weren’t the same people when they left the land of the snakes.  They complained less and were more grateful.  Life-as-usual had been disrupted.

Nicodemus wasn’t the same person when the sun rose the next morning as he was when he had sat down with Jesus in the dark of night before.  He had begun to understand both God’s love and God’s judgment differently.  Everything he knew, everything he understood had been disrupted. You might say he was being reborn.

We aren’t the same people we were a year ago.  All the patterns of our lives have been disrupted.  In a time when need and circumstances required us to stay physically apart you would think we would have made every effort to find ways to pull together, but all too often, as a nation at least, we let the polarity of our dysfunctional politics pull us farther apart.  We have seen the damage caused by the venom of our fears and anger.  But we have also heard the voice of Christ calling us together and helping us relearn our loveliness,  reminding us of our Original Goodness.

We have seen the serpent lifted up in the desert.  But also the cross lifted at calvary.  Through earthquake or pandemic, polar vortex or politics…even snakes…  God’s love still flows to carry us through it all.  Together.